This week’s episode features yet more Star Trek discussion, including what is a brief plot description of the film that I cobbled together from various reports of footage. I may have made some of it up. There’s also all sorts of non Star Trek stuff and a brief foray into whether or not Bond is better or worse for following the Bourne path.

As for the Wii, here is the stupid commercial with the dudes playing Clone Wars Mediocre Light Saber Battle Party Brawl:

We’re back with yet another episode of the podcast. I totally forgot that we were going to talk about Fallout 3, so I lost track of time and the show is, as a result, a bit long. We talk about dead shows (Prison Break, Mad TV, Lipstick Jungle, My Own Worst Enemy), moved shows (Life on Mars), and new shows (a gay superhero on Showtime). Then we argue about Fallout 3 for a bit, a game which I may have built up a little too much for Jose, who hasn’t yet seen the light.

We end with yet another discussion of Star Trek, with the trailer just having hit the mainstream today (go here to check it out) and a recent screening of 20 minutes of footage, complete with actual dialogue, that screened last week to press in the UK. Whereas the trailer was exciting, with lasers and phasers and barrel rolls, the scenes as described are less so. Kirk gets a wacky virus! Scotty is a loon! Jar-Jar gets farted on by a Wampa! I really wish this thing were coming out at Christmas as they’d originally planned, because six more months of speculation and over-analysis is going to drive me mad. 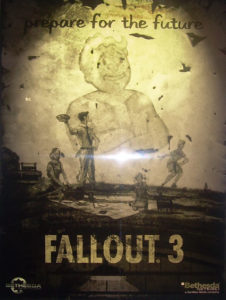 Episode 30 is up, and I am proud to announce that it is a few notches above average. I had a chance to see the Star Trek trailer on Friday, so we talk about that for a while, and there’s some interesting zombie talk surrounding the BBC’s Dead Set, which you should really try to get your hands on if you like intestines and brain matter. We also talk a bit about Fallout 3, which I have only had for to days but already am addicted to like horse tranquilizers.

We’ll talk about this more in depth next week, but NBC has announced that Knight Rider is being retooled. They’re dropping Bruce Davison (Senator Kelly) and some other morons who no one cares about and making the show more about Michael and KITT helping “real people” than fighting terrorism. They won’t be changing the terrible leads, the ugly car, the ugly car’s ridiculous voice, the terrible CGI, or the poor writing. But I am pretty sure Bruce Davison was the weak link, so everything’s going to be just peachy. I’m still not going to watch another episode of this drivel.

Doug and I talked a bit about the new Guitar Hero: World Tour ad starring Kobe, Tony Hawk, A-Rod and Aquaman. I really think the ad is a big moment in video games, where it really starts crossing the line between Geek Culture and the mainstream. When Kobe starts singing into a plastic mic, they are not aiming at the hardcore audience. That said, this new ad that just cropped up, well it just makes me think that I’m not going to the right parties.

Seems as if our new President-Elect has chosen his Chief of Staff, Rahm Emanuel who I think bears more than a passing resemblance to the very entertaining Malcolm Tucker (Peter Capaldi) on the equally entertaining series “The Thick of It” in the U.K. 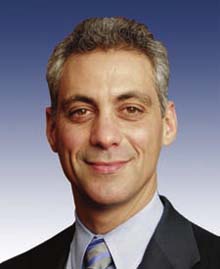 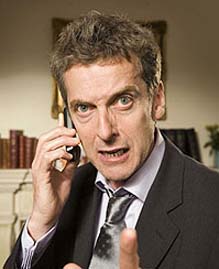 I can only hope that our new Chief of Staff in January is equally as entertaining as his UK TV counterpart.

Something I forgot to mention on the show this week was the beginning of Series 12 of Top Gear in the UK, which is simply the best damn show on TV. As proof I offer this – 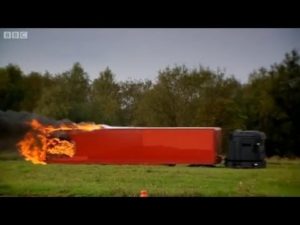 That is a Semi ON FIRE. That is all that needs to be said.

The new episode is up and honestly I cannot remember exactly what we talked about even though it was less than a day ago. Sometimes I just forget things, either deliberately or as a result of age combined with drink.

I do remember speaking about the Movietickets.com Most Anticipated Films list and how ridiculous the results seemed to be. I have been searching for an indication of exactly how the poll was conducted, and it looks as though site visitors were asked to rank a list of film from 1 to 5. I am very curious to know if Watchmen and Star Trek were even on the list, or if the anticipation level for both films is really lower than Ice Age 3. It’s entirely possible that the excitement for Watchmen is only felt among the nerd fringe that I am constantly mired in, and that the rest of the country, the “real people” don’t give a damn about Watchmen. Of course, it’s also entirely possible that I am an idiot and Ice Age 3 will be fucking epic.