This week’s episode has much to do with Transformers: Revenge of the Fallen and men with long flowing beards. We actually took great care to not pass our own personal judgement on the film, as neither of us has (nor, mostly likely, ever will) see it. Instead we tried to address the critical response in comparison to the enormous turnout for the movie. Roger Ebert’s review features the most succinct and visual explanation of the film:

“If you want to save yourself the ticket price, go into the kitchen, cue up a male choir singing the music of hell, and get a kid to start banging pots and pans together. Then close your eyes and use your imagination.”

This is pretty much what I expected. It’s also essentially a description of the first film as well, and yet Revenge of the Fallen has broken all sorts of records, bought Michael Bay a plane for each day of the week, and will make a crapton of money, because no one cares about characters or plot in their event movies, especially during the summer. In fact, everyone I know who was going to see it made a point to tell me that they knew it was going to be terrible but they just wanted to see robots punching other robots. I can imagine robots punching other robots right now, and it didn’t cost me anything and didn’t take two hours and fifteen minutes of my life away.

I drew a picture of two robots fighting to put here but the scanner at my office isn’t working so I’ll put it up later. One of the robots gets Direct TV:

As mentioned on the show, Ebert’s got a certain knack for tearing bad films apart. If you go to the “Advanced Search” section of the site, which it won’t let me link you right to for some reason, you can sort by rating. The zero star ones are good but the half star ones seem to be more amusing.

Here is a link to George Lucas: Maker of Films, the 1971 interview selected by Jose for his Best Thing Ever this week. The accompanying article does a great job of setting the stage for the time period and where Lucas was in his career when he sat down for the interview. The interview itself is embedded on that page. 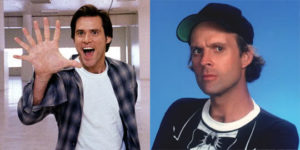 I’m back from Vacation and hopefully that will bring back a normal schedule for the show. Not much to say this week, I felt a little out of sync with the show this week. Most likely due to lack of prep due to a miserable cold I caught over my holiday. I’m all better now, but I spent the better part of last week swimming in a sea of over-the-counter pills…not that it’s a bad thing. Perhaps that’s where my fever dream of Jim Carrey playing “Howlin’ Mad” Murdock comes from. I’m sure that they will cast someone good in the part, I just have a love of actors playing against type and putting Carrey in an action movie could be a brilliant stroke of genius…really…think about it.

Oh and here’s the trailer to “It Might Get Loud”. It opens August 14 in LA and NYC and I’m sure it will open wider shortly there after. Seek it out!

Hey everyone, just a reminder that there will be no new show this week as Jose is up in Northern California drinking wine and placing teacups gently onto doilies so as to not mess up the stain on the antiques. I was going to do the show myself but then I realized I would have to talk for like an hour and there would be no one to pick up the slack.

I will ruin next week’s Best Thing, however, and recommend that everyone who is in an area where the film is actually released goes to see Moon. It’s a very intelligent, old school style of science fiction and the best film I have seen all year. Sam Rockwell is fantastic. Try not to know too much about it going in, if possible. I don’t know what my Worst Thing is going to be but if I have to watch another horrible ad for Year One during the NBA Finals, it might be Year One.

Once again this week on the show we dig into the remaining news from the E3 extravaganza from last week. I don’t know what it is about video games of late that have my attention but starting about a year ago I’ve become really interested in the genre in way that I haven’t been since I was a kid. There’s something emerging in this field of entertainment that’s going to be different than anything we’ve seen before, so perhaps that’s were some of my interest lies. Also I like to see stuff blow up pretty, so there’s always that.

After our forty minutes of video game talk we’ll dig into the weeks news which include all kinds of things you would never think you’d never ever hear. Words like Freddie Prince Jr  and 24 in the same sentence, or Commando remake. It really boggles the mind.

This weeks Best of the week brought me back around to comic books with Morrison and Quitley’s Batman and Robin (preview here). Doug joins in the fun with Achewood, which looks a little strange but anything with time traveling vests is good for me.

We were a day late recording the new episode, but our reason is a sound one. The Microsoft E3 Press Briefing was this morning and we were fortunate enough to attend and watch as Microsoft showed a few games and then trotted out celebrities such as Yoko Ono, Steven Spielberg, Paul McCartney, and Ringo Starr. They didn’t really do anything, but I think they were there just so we could all see the immense and unavoidable power of Microsoft. I do not know how Sony or Nintendo will top this although I have heard rumors of Mario himself showing up at the Nintendo conference to announce to the world that “Itsa me!”

We are very heavy on the video game news up front, but we then return to our normal entertainment coverage. Included therein is a discussion on the Alien prequel that is being set up at Fox. I think we can all (all five of us) agree this is a horrible idea. I mentioned director Carl Rinsch (I’m not totally sure if he’s German or not) and his pretty amazing commercial reel, which can be seen here. They’re really all quite cool, and I especially like the last on the list, “Fred.” While the rest rely on a great deal of CGI, this one’s a little more grounded. These spots certainly show the guy has an amazing vision, but does that mean he should direct a movie which has almost no reason to exist?