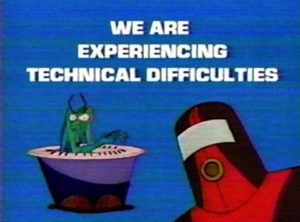 Our mixing board’s firewire ports (both of them) have decided to stop working, so last night we ended up watching the Academy Awards while taking the board apart and blowing on things in order to try to fix them. Which didn’t work. So there’s no new show this week, which sucks because I had all these wonderful bits planned and you could have heard us talk about how obvious it was that James Franco didn’t want to be hosting.

The board is in for repairs, but there’s a good chance we won’t have it back until next week. We will post an update here.

It’s another solidly produced and excellently voiced episode of the podcast! This week we argue once again about Hollywood’s reluctance to put quality, intelligent ideas on network television. Jose remains in the corner of “put it on and let it grow for two or three seasons and people will watch it,” while I am once again representing the side of “maybe that’s true but if you’re the network executive who does that you will get fired and someone else will pull the show and put on a new version of NCIS to get double the ratings.” There is a place for quality on television and that place is cable, where low numbers isn’t an automatic death sentence. I wish it were otherwise but it most definitely not otherwise.

We also marvel over the decision to allow Shane Black to direct Iron Man 3 (see what I did there) and go over some casting news. Plus Robocop statues, Nathan Fillion’s offhand comment that started a Browncoat revolution, and some other stuff. Thanks for listening!

After a bit of a break due to illness and sport we have returned to what will hopefully be a regular podcasting schedule. This week we talk a bit about all the genre related trailers/commercials that have appeared in the last two weeks. Also we chat up the future of Iron Man and TV casting news.

There’s also 5 minutes worth of conversation about butterflies. Seriously. See you next week!