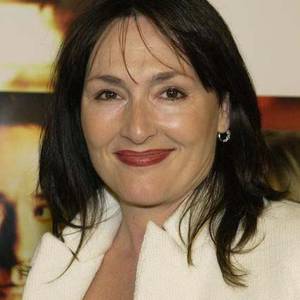 It’s Nora Dunn. She was on Saturday Night Live a while ago. I think she got really mad when Sinead O’Conner tore up that picture of the pope, back when that was one of the worst things you could see on TV. Now she does a lot of small parts on different things, and I think she had a recurring role on Entourage as like a therapist or something. She may be the one who’s a super-conservative crazy person now. No, wait, that’s Victoria Jackson.

This week’s new episode brings discussion of James Cameron’s voyage to the bottom of the sea, as well as Dorito Tacos. Both of these things are evidence that although the world map contains no more blanks spots, there are still new frontiers for mankind to conquer. And that’s just the first five minutes! From there it’s on to the box office juggernaut that is The Hunger Games, as well as a look at the recent furor surrounding Mass Effect 3′s ending. Lots of Bests this week as well, and not a single Worst.

This week on the show we invite our good friend Reuben on the show to help us decode the language used in the new Japanese “Avengers” trailer, which is probably the best trailer that they’ve shown us so far, since it’s more about the team (The Avengers) rather than the individual (RDJ’s Iron Man). I suppose it’s all about marketing. Foreign audiences don’t know who the Avengers are so they need a more comprehensive description of who these people are. Here in the U.S. we know a little more so they lean very hard on RDJ’s popularity for marketing.

The optimist in me wishes that we could do the former kind of marketing hers. Sell the story you have with the characters you have, rather than selling the star. Still, I get it. RDJ sells tickets. Doesn’t stop me from wanting more “selling up” to the audience rather than “selling down”. Anyways we have a good time, thanks to Reuben’s knowledge of Japanese, in dissecting the trailer. 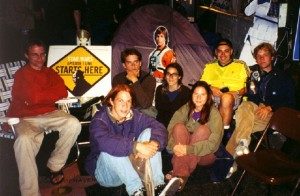 I promise this week’s episode is not nearly as long as last week’s episode. I also promise that I am not in this picture of the 1999 Phantom Menace line, although I am probably off to the side on the pay phone or maybe in the tent doing some heroin. Anyway, this week we’re back to two dudes and two microphones (each pointed in the correct direction). It initially seemed like there wasn’t much news to talk about, but we went in depth on a few stories and managed to talk for over an hour. I’ve had two people at work tell me to ignore the critics and go see John Carter, which I will try to do very soon, but apparently no one else really agrees with them because it didn’t make very much money. We’ll see how much it drops next week. Strong word of mouth might help, but our chances of seeing a second film in the franchise are not looking good. Russia really liked it, though, so there’s that.

This week we finally did something I’ve been looking forward to on the big show…talk about Star Wars and the fans hate for the prequels and everything George Lucas stands for now. We’re lucky to have our good friend Jay Holben on the show as well, who’s a big a Star Wars fan as I know. We had a really great talk and I’m glad that we had it. Now if only I could get Doug to talk about the Master…